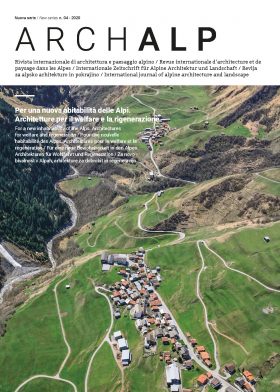 The theme of a new habitability of the territory – which has become very topical in recent years – seems to give the disciplines of the project an active role within the urban processes underway.

Whenever natural events of some significance call into question dominant life models – such as the recent pandemic – we take a renewed interest in social relations, economies, cultures and also in the settlements that make up the backbone of peripheral territories – extra-urban, internal, marginal and mountain areas – looking for “smarter” ways of living.

These are issues on which design cultures have been pondering for some time, through research and studies, but also through “physical” interventions, capable of triggering virtuous processes of territorial regeneration.

In this sense, in recent decades the Alps have been an interesting test bench that has attempted to turn around its marginal situation – in a positive way – starting from the peculiarities of its territory, shaping new experiences, which have sometimes acquired a political value, acting as reference points for housing forms alternative to the urban ones.

The Alps’ decreasing settlement density, their landscape and environmental quality, and the availability of built elements to be recovered and transformed are the features on which recent design activities in the Alpine context have been working in order to open new perspectives for the territory, through re-infrastructuring processes, the creation of local facilities, circular economies and innovative forms of production. These projects are to be interpreted from a “metro-mountain” perspective that – as Dematteis wrote and as the “Camaldoli Manifesto” also stated – gives new centrality to the mountain.

The redefinition of a “right-distance” between cities and territories is therefore, as indicated also by Barbera and Membretti, a central issue for rethinking an integrated infrastructure system that guarantees life and work opportunities in the Alps.

The projects and experiences gathered in this issue of the journal are related to two major topics, which are strongly intertwined and interdependent.

On the one hand, there is the theme of welfare, or of how the architecture and the design of physical space collaborate in the development of a network of structures serving local communities, so as to achieve an all-round qualitative enhancement of places. For example, in Val Bregaglia in Switzerland, in Val Pusteria in South Tyrol or in the Slovenian valleys, contemporary architecture was the vehicle and, at the same time, the epiphenomenon of the creation of an efficient network of community services and facilities.

On the other hand, there is the theme of regeneration of territories which were strongly affected by depopulation during the twentieth century, and by the socio-economic changes of modernity. These territories have now become laboratories in which new forms of development are experimented with, starting from culture and the social involvement of the communities. Examples of such laboratories can be found in Ostana and in the Occitan Valleys in Piedmont, in Topolò in Friuli, but also in those territories that were heavily affected by urbanization and are now awaiting a new identity, such as the peripheral area of Geneva or the tourist resort of Crans-Montana in Switzerland.

Lastly, this issue could not be considered complete without one of the most significant cases in the Alps: that of Vrin, in the canton of Grisons, where, as early as the 1980s, some associations have started a process of revitalization of the anthropic and productive fabric of the territory through exemplary urban and architectural interventions, so as to counteract the phenomenon of abandonment.