Ground Source Heat Pumps (GSHPs) exploit a renewable heat source such as the heat stored in the ground. However, the efficiency and the economic viability of these systems strongly depend on the local ground properties, along with a number of characteristic parameters of the plant and of the Borehole Heat Exchnagers (BHEs). For this reason, we have developed a methodology (G.POT) to assess shallow geothermal potential, i.e. thermal load that can sustainably be exchanged by a BHE during a heating or cooling season. The G.POT method is explained in detail in a paper published on Energy in 2016. 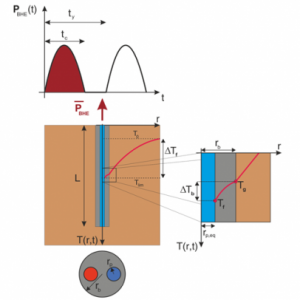 The thermal load per unit length of the borehole q(t) (Wm-1) is hypothesised as an emi-sinusoidal curve, representing a plant working only for heating or cooling, during a season with a length tc (e.g., 180 days) which is also the half-period of the sinusoidal thermal load. The geothermal potential QBHEis therefore the average of this thermal load, and it can be expressed in Watts or in MWh/year. This load is repeated cyclically for a number of years ts (e.g., 50 years), thus reproducing the long-term operation of the GSHP.

The thermal alteration of the ground is therefore function of the ground thermal conductivity λ (Wm-1K-1), thermal capacity ρc (Jm-3K-1) and undisturbed temperature T0 (°C). These parameters are site specific, and should therefore be mapped to assess the spatial distribution of the geothermal potential over a certain area. For other parameters, a unique value can be defined for all the mapped areas: the borehole radius rb (m), the borehole length L (m), the duration of the heating/cooling season tc(s), the simulated lifetime of the GSHP ts (s), and the borehole thermal resistance Rb (mkW-1). If the geothermal potential is assessed over a very large area, climate conditions can vary, and hence rather than a unique value, a spatial distribution of the heating/cooling season tc lenght can be set.

The detailed explanation of the method is reported in a paper published on Elsevier’s Energy, and an MS Excel spreadsheet can be downloaded to apply it.

The paper also presents an example of the application of G.POT over the territory of the province of Cuneo (6900 km2), which was developed in a project funded by Fondazione Cassa di Risparmio di Cuneo. Further details on this project are available at this page (in English and Italian). 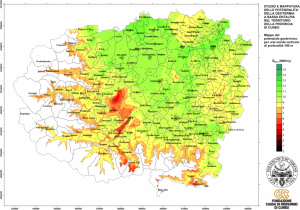