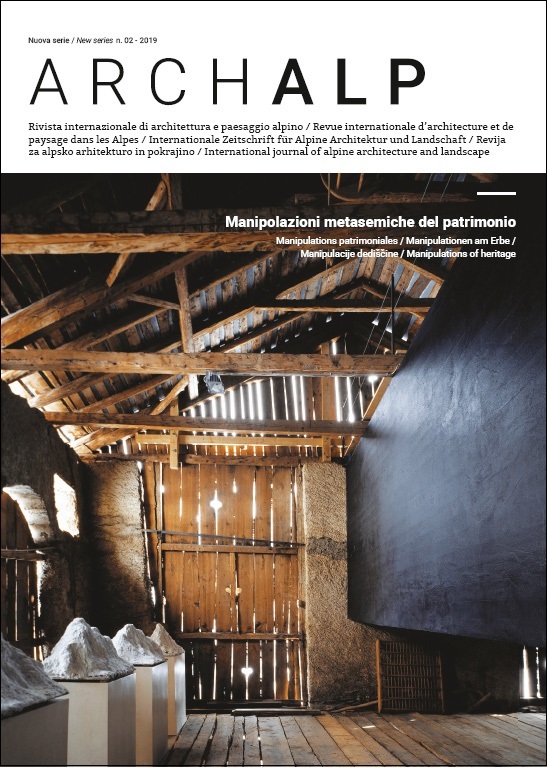 By the Editorial Board

The architectural culture in the Alps seems to have developed in recent years a particular awareness on the theme of heritage reuse and enhancement, developing a non-ideologically conservative approach that – added to an action of “critical protection” – introduces new ways of conscious manipulation of the transformable objects. This issue explores the possibilities of architectural design to achieve an intentionally unresolved and deliberately tensional synthesis between historical and contemporary dimensions, through a process of resignification of the heritage. Thanks to some theoretical essays, a review of architectural excellence examples, and some parallel experiences related to the world of art and photography, we have tried to explore the different ways in which the contemporary project tackles the existing built heritage. The goal is to focus on the possibility of integration of history and contemporaneity, with outcomes that often go beyond these two starting components. Specifically, the proposed architectures show how the historical yet contemporary dimension of the artifacts coexists in a stratified, diachronic and deeply interwoven synthesis. As a result, new and original design research paths have developed overcoming both an approach of values crystallization of what already exists and the rhetoric of the struggle between old and new that has guided most of the interventions on the existing heritage of the previous decades. An attitude that, in pursuing the integration of new needs and functions, works on the scrap, on the reversal of meaning, on the semantic reinvention, on the grafts, overcoming a purely patrimonializing approach to enter a whole new dimension founded on the idea of reuse and at the same time of resignification. This is possible thanks to the use of interpretative and metonymic devices and practices that often seem to come from the world of artistic research. We therefore want to emphasize the interaction between the “before” and the “after” in so far as this tension generates a third architecture that contains them both, placing itself in the furrow of the historical depth of the Alpine settlement processes while responding to the current needs of land regeneration and new livability. To be able to understand the nature of this new culture of reuse it is however necessary to investigate the materiality of the practices, of the building processes, of the composition and construction techniques, of the different figurations obtained: all elements that represent the thematic and conceptual center of this issue.