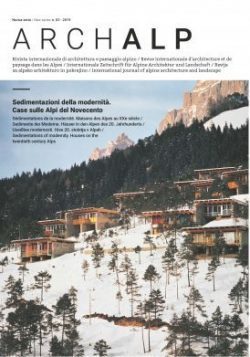 by the Editorial Board

Some Some housing prototypes developed between the 1920s and 1960s have been fundamental in developing a modern idea of living in the mountains; their influence reverberates until today. Along with other topics such as sport hotels, sanatoriums or colonies, we can say that, in general, mountain houses represent one of the privileged grounds
for experimenting with new modern architecture. Experimentations which, in dialectic with the Alpine space, take on multiple and specific declinations. As the architectural historian Fulvio Irace wrote, first of all the project of the
mountain house allows the exaltation of that «research on the isolated object in the landscape that represented an important moment of the whole European rationalism». A series of hypotheses and conceptualizations take shape even just around this one point – the encounter between the geometric forms of architecture and the organic and transcalar morphology of the Alpine environment – showing the richness and depth of these experimentations. However, in addition to the dialectic between architectural object and Alpine landscape and between the inside and outside, the moderns have crossed many lands within the design research on the mountain house: construction, techniques, experimentation with new materials, construction sites in sometimes difficult conditions. We can also mention the connection with history, with traditional typologies and representations, or yet with local technologies and materials, as well as with the introduction of new ways of living and consuming in the mountains. The aim of this issue is to investigate the multiple forms whereby 20th century architecture tries to reinvent its relationship with the different aspects of the mountain: from the alpine landscape to local traditions, from nature to techniques, from new forms of tourism to cultural and social models. The essays in this volume show both well-known and less famous architectures;
however, all of them are strongly emblematic of these years, as they piece together the historical and social context with the time, habits and culture, the role of the client and imaginaries and the cultural references of the designers.
Beside these interpretations, a strong emphasis is also put on the specific design devices developed in this period, highlighting, for every single building, the inside-outside connection, the relationship with landscape, tectonic,
shaping of the space and distribution structure , morphology of envelopes and rooftops, building techniques, materials, and relating all these aspects together with the underlying cultural arguments. The instances analyzed in «ArchAlp» n. 3, show how deeply-rooted is this heritage of experimentations and models which – through a series of layers and
stratifications – constitutes an extraordinary collection of signs, languages, attitudes and approaches that are still considered to be fundamental references for the contemporary project in the Alpine context.